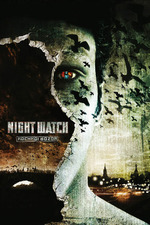 I really wanted to like this film more. The central idea is a good one, if unoriginal. The exposition featuring the medieval battle was probably my favorite part of the film. Unfortunately, the rest of it couldn't match that scene for intensity. On top of this, there is a general lack of sensible rules for which the fantasy elements can operate within; I got the sense they were using rules established the novel, but with only a few separate instances, the viewer lacks the context to truly make sense of it all.

The cast was likable enough, but their value in my mind was overruled by some truly head-scratching decisions made by...most of the characters. Very little made sense or connected, beyond the magicky mumbo jumbo. I was also left wondering why the ancient orders of light and dark dress like thrift store budget Ghostbusters (light) or the assholes who get rejected from the lamest raves in Alaska (dark).

Not having read the novel this film was based on, I have no idea which faults belong to the film alone and which have been carried over.