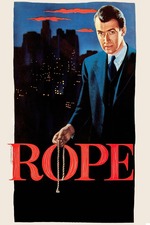 Actually found it a little awkward to watch at first in a theatre, and I was beginning to make the assertion that this movie is best viewed alone since every other viewing experience I'd had with others was just as uncomfortable.

But then good ol Jimmy Stewart enters like 30 minutes in and his offbeat if relatable charm helps ease the tension I'd been feeling and made me realize that the uneasiness I had been feeling is maybe a boon towards this movie's credit as prior to his entrance we were following two murderers after all. Sure, the rest of this movie's small cast arrives too before Jimmy, all mostly good in their own way. Special shout-outs to the mostly shat upon and ignored maid, whose only ever given proper respect from Stewart in the closest this film has to him flirting with anyone (unless like the killers at the center he was gay too!) As well as Cedric Hardwicke as the victim's father.

But (along with the film's experimental, theatrical filmmaking) it's my favorite actor in his first team-up with the master that really makes this film special. I'd always thought and agreed with the consensus (and Jimmy himself) that he was mostly miscast here. Seeing it at the movies, and with an audience, I don't think that was so much the case. More he made the role his own. It's a wonderfully quirky part, one that although Jimmy went on and played more challenging, darker roles (often for Hitch,) made me wish he played an outright villain. After The Thin Man doesn't really fall into this sentiment.

Does it also fascinate anyone else that Hitchcock and Stewart's first two collabs were both single setting thrillers? And we all know how even more stellar Rear Window was don't we...

Strangers on a Train