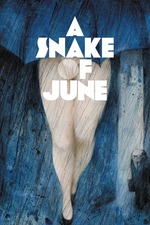 A Snake of June

I'm having the same reaction to this film as I did my previous Tsukamoto picture "Bullet Ballet". Artistically and thematically I think the film is quite effective. To the point where, similar to other Art House directors of the 1990s/2000s, I can tell that the film is meant to be dug into and I will fully admit that on an initial watch I know that there were details I missed that I will appreciate more on a rewatch. However the transgressive style is so overwhelming, and like many films of this era, the editing and sound design choices have aged. This discourages me from wanting to revisit it, however I admit that the rating will increase on a rewatch when that day comes.

I feel as though true punks reading this will disagree but I like how the film takes a chaotic and violent approach to the softer themes explored. And I'm conflicted as some scenes I feel are perfect. The scene towards the end in the rain specifically floored me.