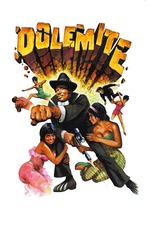 You have to admire the noble failure of Rudy Ray Moore's Dolemite film. It's so amateurish and problematic that it feels like Moore was incapable of making something better. However he is self-aware and so the whole endeavour has a commendable charm. Plus it's funny, in both intentional and unintentional ways. Moore's music also elevates the film with its more perfected tone and humour. Dolemite as a character works better in those moments of literal performance. As an onscreen presence, he is an awkward one. Moore's infectious energy does not extend to the scenes of exposition or story. Even in the fight scenes he seems to give up midway. Dolemite definitely has some of the least convincing fight scenes in cinema, with so many shots showing an obvious lack of contact. The film is badly acted and stilted, with every edit being abrupt and the terrible dialogue delivered incredibly unnaturally. The plot barely hangs together, as it's all loosely structured to allow for dances, fights, and Dolemite performances. In fact, Dolemite is actually a little boring and quite repetitive. Dolemite is worth watching because it has some fun bits and it's an interesting piece of culture. That doesn't mean it's good, but it's certainly fascinating.

Side-note: The recreations of this film in Dolemite Is My Name are so spot on.