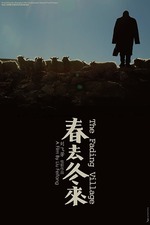 The Fading Village is about a rural hamlet in China, with an elderly population slowly dwindling away. It will soon likely no longer exist. All that will remain are buildings and ghosts. In 100 years time, who will remember this village? All these people, their lives, their memories, their love, their hate, all will be lost. The sadness here is not that change has arrived, because that is inevitable, but that all these moments will vanish. We won't remember the people who birthed the generation that changed China. Are we all just cogs in history, without worth in the grand scheme of time?

China is changing rapidly, and in one lifetime certain people have seen a country go through war, communism, and now a new version of capitalism. China's development has been so swift that millions are left behind. The contrast between the new, globalised Chinese population and the isolated rural lives of many of the old and impoverished could not be stronger. The Fading Village does not have new insights into China's changing society, perhaps because that market has been cornered by Wang Bing and his incomparable, definitive Tie Xi Qu: West of the Tracks. Instead The Fading Village follows the lives of a few intently and shows us their daily struggles. We witness the seasons change as lives remain stagnant. The biggest event in their year is a funeral. When we reach the Spring Festival and we see the contrast between the urban dwellers and the poor villagers, you can feel the world slowly closing on one way of life. It made me shed a tear.

The Fading Village is cumbersome, because it feels staged at times and doesn't quite justify its nearly three-hour length. Both much shorter and much longer films have captured the feeling of a place better. Right at the end, The Fading Village reveals a connection between its director and the village. That seems far more fascinating than a lot of what The Fading Village presents. The Fading Village is a noble use of cinema, which brings you the burden of history, but it's not more informative than many other pieces. Yet, as I watched people struggle to herd goats or carry crops, something stayed with me. Life has to be humbling, because otherwise there's no point to it.