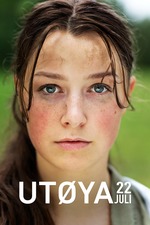 The horror film of 2018. Utøya: July 22 places you within an impossible-to-comprehend scenario and the danger and fear that you witness is enough to make you queasy, especially knowing how true these events are. It does some things very right, most importantly it focuses on the victims of this incident rather than the perpetrator. Whilst the style may seem exploitative in theory, the one take conceit is actually effective and well executed, successfully placing the viewer amidst the reality.

However, just because this film is important does not make it flawless or mean it will impact the people it most needs to. This is a fictional film, and its fiction is distracting to say the least. It attempts to cover a lot of ground, so brief conversations jump around a variety of topics, including political ones, and all this does is emphasise the context, which seems pointless in a film trying to immerse you in a real-time incident where people don't have context. There's also cheesy family dynamics at play and some conversations feel very scripted, not naturally captured (especially one where the lead character ends up singing). Worst of all is an ironic, melodramatic twist thrown in at the end, which cheapens the experience and is quite sickening really when you consider that a real life massacre has been thoroughly recreated just to serve a story which is rendered pointless by the final few seconds. This film did not need a story. All it needed was reality. It didn't need character moments, a narrative full of twists, or even any sort of plot whatsoever. Making this event a melodrama only takes away from the reality the victims had to face.

Yet, Utøya: July 22 is incredibly powerful. There's a scene where an injured girl must contemplate her death. She's scared, unable to know why this has happened and unable to contact those she most loves. Whatever else is said, moments like this are heartbreaking. It takes delicate skill to show things like this without being indulgent and tactless. Utøya: July 22 may be filled with distractions, but at its core is a reality we need to never forget.