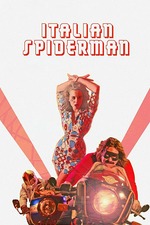 You see Kung Fury, this is how you create a parody of cheap B-grade films properly without ruining B-grade films and through actual humour.

Italian Spiderman parodies the foreign rip-off counterpart films, such as Indian Superman and Japanese Spiderman; but unlike Kung Fury, it works since it understands how the films they are trying to parody are set out. Italian Spiderman has nothing to do with Marvel's Spiderman, grasping the infamous foreign rip-off trope; it works to the films advantage to create a cheap gimmick and a dumb premise. The film doesn't force the jokes and it actually looks like it is from the '70's/80's, unlike Kung Fury which is set in high definition.

Skip Kung Fury and watch Italian Spiderman; I know I had an even better time viewing this parody, you will probably too.