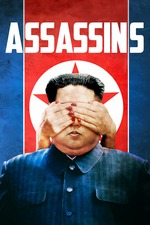 We live in a golden age of artless documentaries that have no discernible purpose or ambition beyond regurgitating the recent past for people who would rather spend 90 minutes watching something on Netflix than 10 minutes reading the same information on Wikipedia, but the truth is that things have gotten so out of hand that you can’t even believe that certain things have happened until you see them with your own two eyes. Or until a trustworthy filmmaker has laid out the facts against an ominous score and punctuated them with enough infographics and interview footage to remind you that truth is stranger than fiction (and getting weirder every day).

An example: Back in February of 2017, you probably heard something about how Kim Jong-un’s older brother was assassinated in broad daylight at the Kuala Lumpur International Airport. You might still recall that his name was Kim Jong-nam, or that he was murdered by two young women who snuck up behind him in the middle of the crowded terminal, cupped his eyes as if they were surprising an old friend, and wiped VX nerve agent — the deadliest substance on Earth — directly into his eyes. Some people out there may even remember that one of the killers wore a white t-shirt that had “LOL” written across the chest in thick black letters. But did any of that information really sink in? Did the sheer audacity of that hit linger in your mind the same way it might have had you seen it in the James Bond movie where it belongs? Did the geopolitical implications of the attack inspire you to follow the story as it fanned out to a matrix of ambassadors and secret agents that spread across the whole of Asia? Or did it all seem too farfetched to settle into the part of your brain that tries to make sense of world history? There were rumors that the two women had been under the impression they were participating in a Japanese prank show, but that deranged twist only made the news seem more disposable somehow.

This is hardly a new phenomenon, even if it’s now occurring at an unprecedented pace: The greatest trick the devil ever pulled was convincing the world he didn’t exist, and history’s most dangerous men have always been those who knew that rational people would struggle to imagine their crimes. And so it’s easy enough to appreciate why Ryan White decided to make a documentary that explains the death of Kim Jong-nam in the most straightforward terms possible; why “Assassins” eschews subplots, color commentary, or even any kind of residual context as it walks us through what happened. Indeed, the story is so outlandish — and the film so dry — that it’s hard not to be impressed by the discipline White showed in refusing to have more fun with it. He knew that the facts would prove riveting enough on their own (and they do), and he wanted to capture this liquid moment in history before we all wiped our hands of it, or it sublimated into the atmosphere of an age when the breathing air has become toxic enough to disguise the other poisons we pump into it.