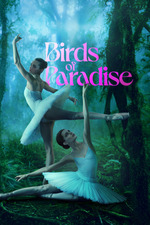 It would be easy — and not especially inaccurate — to dismiss Sarah Adina Smith’s “Birds of Paradise” as a YA riff on “Black Swan,” but this giallo-inflected ballet thriller proves too intoxicating and possessed by its own spirits to be relegated to the shadows of its influences. Besides, the movie owes just as much to Luca Guadagnino’s recent “Suspiria” remake; if not for its supernatural menace than at least for its witchy mood, which helps texture a conventional story about ultra-competitive teenage girls into something that more closely resembles a crucible for the survival of their very souls. Okay, so most YA adaptations are super derivative, but at least this one has style. And a real sense of danger. And Jacqueline Bisset as a French dance instructor who refers to her students as “rats,” and lets them call her “le Diable” in return.

“Birds of Paradise” begins as a fish out of water story about a cash-strapped Virginia teen named Kate (“Booksmart” breakout Diana Silvers) who tiptoes into an elite Paris ballet academy on somebody else’s dime — the identity of her benefactor will become a major source of conflict down the line. A gawky American daddy’s girl whose look and demeanor alike are equal parts Anne Hathaway in “The Devil Wears Prada” and Jessica Paré in “Mad Men,” Kate has only been dancing for five years, which makes her an outlier in a place that has practically served as an orphanage for the other students (whose parents are alive, but rich enough to pretend otherwise). She has a forthright confidence and a latent awareness of her beauty, but she isn’t sure how either of those attributes will help her plié to earn a spot on the city’s fabled ballet corp at the big dance-off.

For every white swan there must be a black swan as her foil, and so we meet the pursed and powerful Marine (Kristine Froseth, star of Netflix’s “The Society”), a tightly controlled tornado of raw anger and pure grace who’s lived at the academy since she was eight, when her mom became the American ambassador to France (her dad is a businessman who specializes in “milks”). Marine would be the queen bee in a less cutthroat school, but here — for all the social advantages provided by her top-of-the-class talent and print model looks — she’s just the damaged bunhead whose épaulment has been all out whack since her twin brother and dance partner died the previous year.

There’s almost as much blood in the water as there is in the pointe shoes, and it’s driving everyone into a frenzy; when Kate makes the faux pas of mentioning Marine’s lost half, the latter almost rips her head off. What are the odds that both of these girls — competing for the same position, and also for the sexual attention of the straight cavalier who lifts his dance partners high enough that it looks as if they’re flying — would be forced to share the same musty dorm room? Two girls, one full-size bed, and zero visible pores between them.