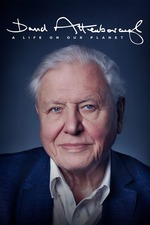 David Attenborough: A Life on Our Planet

“I am David Attenborough, and I am 93.” So begins the latest (and potentially last) documentary that bears his name, as the revered English broadcaster and natural historian looks into the camera and reintroduces himself for the umpteenth time with all of his usual warmth and honesty. But such a pointed hello is enough to establish that “David Attenborough: A Life on Our Planet” will be a bit different than “David Attenborough’s Natural Curiosities,” “David Attenborough’s Conquest of the Skies 3D,” and the scads of ecologically minded (and more generically titled) shows graced with his awe, curiosity, and brandied speaking voice.

For one thing, Attenborough is onscreen throughout much of this urgent film, which might surprise viewers who know him as the disembodied narrator of the epic nature series he’s made with the BBC in the Blu-ray era. Beyond that, it’s striking how Attenborough isn’t just playing his typical role as the erudite commentator with a contagious enthusiasm for life on Earth in all its forms. The man is still too humble to let himself become the subject at hand, but now — toward the end of his own natural life — Attenborough is showing us the world as he sees it. For all of the incredible things he’s captured with his camera, “A Life on Our Planet” is perhaps the first time Attenborough is acting as its lens.