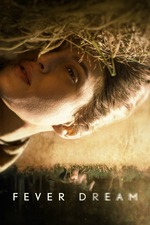 A frightened young mother named Amanda (Maria Valverde) is being dragged on her back through a dark marsh. Worms — worms that are everywhere inside the body. “You have to understand what’s important,” the pre-teen David (Emilio Vodanovich) invisibly whispers into her ear canal. “Where’s my daughter?” Amanda asks. That’s not important. Beautiful Carola (Dolores Fonzi) leaning her head out of a car window, her curled blonde hair catching in the wind. A slow river seeps by into everything it touches. You have to pay attention to the details. Horses breeding and dying. Souls in flight.

Adapted from Samanta Schweblin’s 2014 novel of the same name, Claudia Llosa’s faintly delirious “Fever Dream” is a head-trip of a thriller that’s true enough to its title from the moment it starts; it’s a cold shiver of a film that doesn’t unfold so much as it sweats out, the most effective scenes febrile with maternal panic so intense that you can feel the movie hovering between life and death — allure and repulsion. The plot is not a puzzle to be solved, even if its liquid structure is swirling with clues that David urgently diagnoses for their relevance, as if instructing us how to watch a story that he’s seen many times before. Look at this. Ignore that. “Sometimes your eyes aren’t enough.”