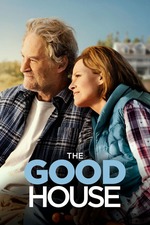 “I never drank alone before rehab,” cracks Hildy Good (Sigourney Weaver), a divorced, 60-year-old real estate agent whose façade of grace and stability is crumbling even faster than that of the quaint Massachusetts harbor town where her family has lived since the days of the Salem witch trials; what’s happening to Wendover isn’t what you’d call “gentrification,” but the influx of chain businesses and white-collar types buying up all the colonial houses has made the place a shell of what it used to be. Hildy is on the verge of getting priced out, herself, and she’s not taking it well.

By the time we meet her, she’s already talking to herself — or to us through the fourth wall — with the performative casualness of someone who’s about to have the rug pulled out from under them. It’s a device that helps Maya Forbes and Wallace Wolodorsky’s “The Good House” capture the deceptively cock-eyed tone of the Ann Leary novel on which it’s based, but also one that epitomizes how this weak-kneed adaptation sacrifices the rich interiority of its source material for the sake of something much broader; something that people might buy, even if they can only almost afford to invest themselves into a script this scattershot (co-written by the directors and Thomas Bezhucha). Like its heroine and namesake, “The Good House” is a drama that strives to sell itself as a sly and vaguely supernatural comedy for adults. And like Hildy, the film waits far too long to relinquish that happy-go-lucky idea of itself.