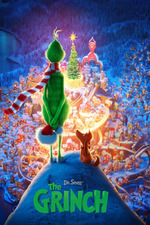 This critic hated “The Grinch” for almost its entire duration, he sighed and he cried and he dreamed of vacation. It could be his head wasn’t screwed on just right. It could be, perhaps, the midterm polls were too tight. But it seems the most likely reason of all, may simply have been that he was not in its thrall. The animation is ugly, and the jokes sure are stale. From the moment it started, he wanted to bail. It’s not as if the people who gave the world “Minions” could possibly still care about a grown man’s opinions. And Benedict Cumberbatch, what’s with that voice? Was “Colin Hanks with a head cold” your only choice? But of all bad reviews, this one’s not too mean — we were oh-so-much harsher on that movie about Queen. At the end of the day, Dr. Seuss still delivers. Even manufactured kindness is enough to send shivers.

Illumination Entertainment makes movies for bored children and desperate parents. From “Despicable Me” to “Sing,” the company’s garish, manic, and comfortably mediocre products look and feel like the cinematic equivalent of “Candy Crush” — they’re designed for no other purpose than to sedate your kids, pass your time, and pick your pocket. “The Grinch,” despite the pedigree of its beloved source material, is no exception.

That’s less of a diss than it is a statement of fact, because Illumination — to its credit — is pretty upfront about its agenda. While the Pixar studio ident features a lamp bouncing on a ball, and the Disney logo is just a splash of light cresting over a castle, the Illumination fanfare is a 15-second barrage of corporate branding that somehow manages to include a screaming animal, a blast of pyrotechnics, and — of course — a devious little Minion (those muttering yellow eyesores having become the company’s signature creation in more ways than one). This is what Illumination does. This is what the studio makes. This is the water and this is the well. Drink full and descend.

The Nutcracker and the Four Realms