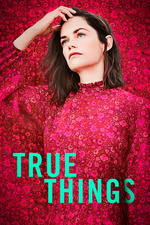 Another strong addition to the growing sub-genre of stories about people so desperate for a little danger in their lives that they decide to get romantically and/or creatively involved with Tom Burke despite the fact that he’s a walking red flag six feet tall who would sooner self-destruct than return anyone’s emotional investment (previous entries include “The Souvenir,” “The Crown,” and “Mank”), Harry Wootliff’s “True Things” is a movie that starts with a woman surrendering to fantasy, and then slowly unravels as she tunnels her way towards freedom. It’s the Burke Effect in action: Films project through him without getting stuck. His devil may care darkness stains everything it touches, but it’s tempered with a lightness that helps people find their way to the other side.

So while every part of you might want to shout at a listless Ramsgate government clerk (Ruth Wilson) to run in the opposite direction of the dyed blond ex-con who slurs into her cubicle one gray afternoon like a “Good Time” cos-player gone too far, people familiar with the ghosts of Burkes past might be more willing to watch Kate make a mess of things. We’ve seen how a guy like him can erase the women he promises to make whole, and we’ve seen how those same women can redraw themselves by their own hand in the blank space that he leaves behind.

One of the few things we know about Kate — average bordering on archetypal — is that she needs someone to help shake her out of her self-image. To show her that she’s allowed to color outside the lines. Slouching towards 40 in the same British harbor town where she was born, Kate spends her nights dreaming of some faceless man who might go down on her at the beach, and her days showing up late to a purgatorial office job that requires her to stick to a script. Women like her are probably easy marks for men like Blond (a direct object of a character whose real name is shown but never spoken), but he seems too aloof for a predator, even when he pressures Kate into an impromptu midday tryst. He looks at Kate like she’s a bar snack and not a meal, although his stomach is growling after four months in prison. And when someone who clearly only cares about himself gives you even a taste of their attention, well, folks have thrown it all away for less.