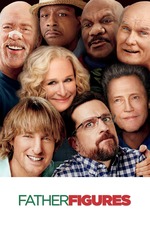 This is a fun film with some good comedic moments and some nice touching moments too, it’s nothing brand new that we haven’t seen before. The plot is pretty common as we these two brothers search for their father, they go on a wild goose chase and are constantly sent off on different leads as they try to come into contact with their father. The two leads are great in this film Ed Helms and Owen Wilson deliver fun energetic whitty performances, they have some nice moments as they learn all about the morals and what it’s like to be a ‘father figure’. Some of the best parts of the film are their interactions with Katt Williams who plays a hitchhiker, and he brings some nice moments with the train scene in particular. It’s a film with lots of over the top goofy moments, however there is a nice back story as they go on this journey together. It feels a little bit like the Dumb and Dumber sequel from 2014, with a similar plot and I think this one did just as good of a job with 2 likeable leads at the forefront of the film.

Overall I’d rate this a 3 and a 1/2 movie ⭐️ There is so really funny moments, and a nice touching fun journey and story however there is a few little slower moments and some times where the comedy felt forced. If you are looking for a nice dynamic duo going through a fun journey, I’d recommend catching this comedy movie, although not a stand out, it certainly holds up well in comedy movies for me.