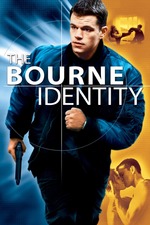 This action thriller starting Matt Damon as a highly skilled and trained assassin loose his identity looks to find himself again. The film also stars Franka Potente as she is forced into joining Jason in his adventure of survival. This is one of my favourite action movies I’ve seen, as there is great action with lots of variety car chases, hand to hand combat, quest assassinations and there is a incredible 1-1 fight scene with a knife v a pen. The film has some incredible eery tension as Bourne is always up against some highly skilled killers. We start of straight away with a mystery; a man being pulled out of the ocean and a bullet is removed from him, and that is all we see. We have no idea who this man is, just like the man has no idea. He is constantly searching for his identity and when he eventually finds it in a great reveal he remembers what happened in the ocean and how he doesn’t want to be this trained assassin working for the government.

Overall I’d rate this a 4 and a 1/2 ⭐️ film, it has everything you want from ah action thriller, there is great mystery which keeps it unique and engaging, there is some sensational action scenes and there is some great emotional with his relationship with Marie and Jason. I’d highly recommend watching this if you haven’t before.