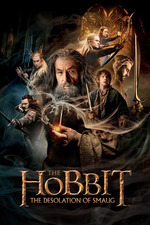 The Hobbit: The Desolation of Smaug

The sequel to the first Hobbit movie, starts of with lots of fun again, as our Dwarfs with Gandalf and Bilbo are on the journey towards the mountain too get the Dwarf’s home back.
The journey takes them too a lot of danger similar to the first as they are on the run from the Orc’s. They come up against some huge spiders within the forest, where Bilbo uses the ring to help go invisible and fight off the spiders as he helps to save all of the Dwarfs who get caught in spiders webs. The Dwarf’s are then saved by Elves, however they are taken by them and captured as they don’t trust why they are travelling in their area. During this scene we see Legolas and Tauriel, which is great additions to the second movie, played amazingly by Orlando Bloom and Evangeline Lilly. These two have great chemistry and are really fun during every scene. This has a great scene as Legolas meets the Dwarf’s as he has a little interaction with Gimli’s dad. Bilbo manages to help save all of the Dwarf’s as he again uses the invisible ring, the Orc’s chase them down and fight against the Elves, which allows the Dwarf’s along with Bilbo to escape inside some barrels down the river, as the Orc’s are trying to stop them with their arrows from the sides of the river. This was my favourite scene as we see arrows flying everywhere and Legolas and Tauriel are helping the Dwarf’s escape by fighting off the orca, with some of the best action in this film, with some really great kills. Once the Dwarf’s escape they are helped across the river and eventually reach the mountain. They enter through a door that opens up thanks to Bilbo’s patience as the other Hobbits give up and are about to turn back. Bilbo is sent yo find the stone that the Dwarf’s are searching for but is met with the dragon Smaug. The film ends with all of the Dwarfs and Bilbo running away from the Dragon Smaug.  Thorin played by Richard Armitage steals the show in this film and is the Aragon type character in the Hobbit trilogy as he’s the rightful king and is a worthy leader for his people. Bilbo is again played brilliantly by Martine Freeman, he is so likeable and you can really root for him. Smaug is voice excellently
by Benedict Cumberbatch and the CGI for the dragon is really good.

Overall I’d rate this film a 4/5 ⭐️ it is an excellent sequel as we see the characters continue on their journey, I slightly prefer the first film as I enjoy getting to know the characters and like their funny dynamics, and seeing Gollum was great, however Legolas is a good addition to this movie and the action is better in this one.

Let me know your thoughts on the second hobbit movie, and your favourite moments.

You Were Never Really Here