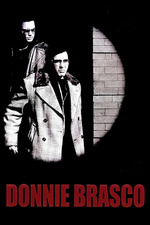 Based on a true story of an undercover FBI agent tasked with taking down a mob family from the inside. The subject matter and themes to be found in 'Donnie Brasco' are clearly not particularly original. It is also probably fair to say that this type of story has been delivered more effectively by more accomplished directors. Mike Newell's direction here is slick and polished but I never quite felt like he made his stamp on the film like say a Scorsese or Ford Coppola might have. Some great acting and a solid script however carried the film home with ease and made 'Donnie Brasco' a highly entertaining crime drama.

One major positive here is that we get to see Johnny Depp before he succumbed to all those roles with silly make up and wigs. He is much better off without all the gimmicks too. His character of Joe Pistone who goes undercover as the titular Donnie Brasco made for an intriguing hero. You are never quite sure if he is just very good at his job or if he is slowly and steadily losing himself in the mobster way of life. This helped build some real tension in the narrative and the film does a good job in keeping you on your toes guessing how it is all going to play out. While Depp delivers one of the better performances of his career he is outshone by the Mafia-film icon that is Al Pacino. It seems clear here that Pacino had hit a point in his career where he had been typecast in these sorts of roles. His portrayal of the mobster Lefty Ruggiero however is utterly compelling and shows what a great actor he can be when he reins in his more flamboyant mannerisms. He made for an often likeable yet tragic figure and despite his questionable misdeeds I found myself caring for him as the film drew to its collision course of a conclusion.

All things considered, 'Donnie Brasco' is a compelling character study that is also an enjoyable crime drama. From start to finish I found it to be an intriguing and entertaining watch on a subject matter that is clearly a winning formula for great film-making. Does it bother me that it is not quite as good as those other Mafia films that it is clearly aiming to emulate? Forget about it!