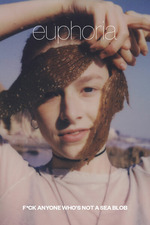 Euphoria: F*ck Anyone Who’s Not a Sea Blob

As a lot of my followers and friends on here probably notice that I rarely go personal on here. It’s not because I actively don’t want to, it’s just because it’s extremely rare a film ever truly hits me emotionally, and most of the time I hardly ever even try to review those works cause it’s too hard. But this special is so masterful, so powerful, so genius, and so deeply personal to me I think I have no choice but to get very personal with this.

So to start this all off, I figure I’ll give a little intro to gain a little bit of context, but at the end is where it is fully said.

I’m gonna assume the vast majority of my followers don’t know that I (very often) experience gender dysphoria. If you don’t know what it is, Gender dysphoria is basically being completely unsure of your gender. In minor instances, it usually helps people realize they don’t conform to traditional gender roles or maybe helps them explore their masculinity or femininity. While in major cases, it can help someone discover their real identity, usually being transgender. This is a major point in not only this episode specifically, but of Jules’ character as a whole. It’s also something I can resonate with very deeply, so I figure it’s important to talk about.

Euphorias special episodes as a concept didn’t really make sense to me until I actually saw the Rue episode. I initially thought they were gonna be episodes that were only created to hold people over until season 2 was released. It wasn’t until I saw Trouble Don’t Last Always that I realized these episodes are an absolute necessity for the show.

These two episodes not only provide a much needed change of pace for the show, it basically covers all of the loose ties from season 1. It connects the entire show as one cohesive whole.

This episode is at its simplest Jules reflecting on her relationship with Rue, her experience in this new town she has moved to, and most important, her experience of being trans. Since trailers and stills remained very cryptic on what this episode is about, I didn’t expect this going in. So as I eagerly waited for the last week for this new episode, even tho I barely knew anything, I was very excited to see Jules’ side of things for one of the first times in the show.

What I didn’t expect however was the truly gut wrenching and powerful talks of Jules’ experience with transitioning and dysphoria. So yeah, this one hit hard. And while my 5/5 rating for this may seem like it’s on a whim, I’d like everyone to know I don’t hand these out very easily. To me, you have to go above and beyond to obtain that rating. And I think that this special does that and more.

Not only does this episode contextualize almost every loose end with the characters of Rue and Jules, it is practically the thing that proves this show is a masterpiece and more than people interpret it as.

Jules talks for a while about her experience with being trans. She details how her experience with femininity ended up with her instead being controlled by the ideas of femininity instead of her conquering it. She talks and describes how her experience ended up with her letting men and their needs decide her path instead of her deciding her own path. In the beginning, she says she’s thinking about wanting off of her hormones and detailing why. It ends with her confirming she wants off her hormones. Everything Jules said is something I could not only connect to but it made me feel things I’ve never felt watching something before. Seeing her slow progression into sadness throughout this therapy session truly hurt me to watch.

Jules’s character shines more than ever in a way that proves to me anyways that she is quite easily the best and most complex character in the show. Jules’ experience with her mother, the almost trauma Nick has caused her, and her imbalanced relationship with Rue finally give us the answers to the questions we needed. So yes, it seems Rue is indeed a unreliable narrator.

Jules only wanted to be loved for her real identity. She didn’t want to be loved for her appearance, not her online presence. She wanted to be loved for being her true self, something she didn’t feel happened until Rue. Because of this, Jules desperately tries everything she can in every situation to make sure she does not lose Rue. Rue is the ultimate thing that makes Jules truly feel her love for someone, but also holds Jules’ identity together. Without Rue, Jules now feels lost and descends back into the darkness of gender dysphoria and questioning.

The end of this episode is what really fucking drives it in that this episode is really not gonna be easy going. It seems that both of these episodes occurred in the same day. Rue comes to Jules house just to check in on her  They share awkward apologies and a few moments of crying before Rue abruptly leaves. This causes Jules to believe she has lost Rue for good.

In TDLA, the camera zooms in to show rues final
feelings until season 2, we see that she seems not only sad, but betrayed by Jules which causes her to relapse. She feels that Jules has caused her to fall back into her downward spiral after being abandoned at the train station.

In this, Jules’ final feelings are despair and hopelessness. Jules has convinced herself she has lost her love and the thing keeping her together. We zoom out of Jules crying on her bed, basically losing the stability of her own feelings of identity and safety. Jules has been left in the dark. These two ending shots are the inverse of the opening shots of each character in the show.

Rue’s story begins in the womb, where she herself believes was the last place she was happy in life. In the beginning, she was content and happy. In the end, she feels a mixture of mad, betrayed, and sad.

Jules’ story begins as we see her riding her bike across town, looking off into the sun as a new future and new place awaits her life. In the beginning she was excited and confident. In the end she is left hopeless and insecure of the very thing that she believes defines herself.

These two special episodes perfectly define what this show is. They are the very thing that ends the first part of Euphoria. It not only feels like a genuine stroke of absolute genius from Sam Levinson, but it feels a truly monumental work of art is being created in front of our eyes.

This episode has affected me very deeply personally and it could not have come at a better time. The last week has been extremely shitty for me, Ive been having mild to severe periods of experiencing gender dysphoria almost every day, in general I have just been feeling quite down. And while this episode really isn’t happy at all, it has made me feel just a bit more comfortable and accepted in my experience

And finally, I’d like to say something really big and really scary for me to talk about. It’s been hinted at time and time again in this review I probably don’t even have to say it. So I guess any followers who have seen euphoria and friends who are reading this can know. This is most likely the most personal thing I’ll ever say on this page.

To the online friends from one specific group chat who are reading this, I am sorry for not telling you for so long. This has been a very big and life changing thing for me that I have not been comfortable telling a lot of close people to me just yet. Yes, maybe 11 months is a bit long to hide this from you, but I did it because when I did come out to you I wanted to be sure that I was ready to confront and know myself for you guys. You guys even accidentally found out once and I tried my best to brush over it because I was just not ready for you guys to know yet. So enough stalling, here goes:

My name is Audrey, I go by she/her pronouns, I am a girl, and I am trans.