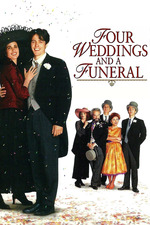 Four Weddings and a Funeral

Film No. 21 of: CineMania I- The December Challenge

This film's biggest setback and dissapointment is that it sets up a perfect anti-cliched route for Charles, and ignores it.
Instead it chooses to go down predictable route.

It is a delightful British romantic comedy.
It is funny, and Grant is terrific in his role.

I enjoyed it quite a bit, until the dissapointing end.

Why would you choose to go down the easy route?

Why?!!!
Why do rom-coms annoy me so much in the end?
Why can't they once in a while do something different?
When they do, like Ruby Sparks, (500) Days of Summer or High Fidelity they work so well.
When a film goes the opposite way of what is expected I enjoy so much more.
Purple Rose of Cairo is in my opinion one of the greatest romances ever.
The end is so melancholic that after the film ended I was impressed by the way Allen went against the norm.

If this film would have went the different route I would have loved it.
It has everything a terrific rom-com has, but then ruins it in the end.