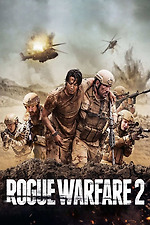 Fact: Rogue Warfare is a trilogy.

Another fact: I hate this trilogy and I haven’t even finished it.

Yet another fact: all the “accents” in this suck ass. The UK operative is at least trying. Still terrible, but at least he tries. The French operative doesn’t even try. I usually forget the Chinese operative is even there. Then of corse you need the cliche chick sniper of the group. Who is Russian. I know this because her hair is white and she says Nyet instead of no. The only characteristics of a Russian.

One more fact for the road: the villain in this... if you like long rambling monologues in the desert, then this is the movie for you! Also the whole black mask thing is kind of hilarious. You get quotes like “you can’t see us.” Its actually amazing.

Ok actually the last fact on actions scenes:
The breakdown:

Team sets up on random hill that has perfect view of target, with little to no geological sense.

Begin a stealthy scene with suppressed weapons and whispery comms.

Alas the objective isn’t there or something goes wrong.

Commence the inevitable action scene with cgi head shots and people haphazardly taking cover. Of course the magical hillside with our sniper gets a few cameos. This magical position has a viewpoint of the entire mission.

Extracting through the magical hill and to a random FOB

End of every action scene in this franchise.

Writers note: don’t really know why I did this to myself. Will probably end up watching the third one.  Will also probably play animal crossing the entire time as it plays in the background.