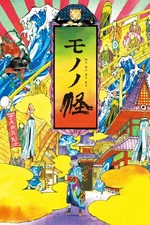 “We spend the same time together... we see the same views together... But the way we feel are by no means the same.”

So. Incredibly. Trippy. Mushi-shi on wayyy too much acid.

My other complaint is that both the animation and the story telling are often quite choppy and repetitive. This actually isn’t too much of a problem, however, as Mononoke has incredible uniqueness and daring vision throughout the show.

The storytelling is very similar to Mushi-shi, in which a shaman-like “medicine vendor” goes from place to place solving spiritual ailments caused by “Mononoke.” These Mononoke are created from the grief, suffering, and resentment of humans. Basically it’s the story of Mushi-shi but more violent, eerie, and trippy and less subtle, emotionally impactful, and philosophically deep. Despite its (in my opinion) clear inferiority to the storytelling of Mushi-shi, Mononoke draws heavily from Shintoism and Japanese Folklore in fantastic ways, giving the entire series a traditional, enthralling folkloric aura.

This traditional folklore aura is enhanced incredibly by the fantastic art and music. The art and animation are the most unique and daring I have seen in any anime; fully committing to an extremely surreal and extremely traditional art style. The art of the series carries a large weight of the storytelling, and is consistently mind boggling (even if you’re sober!). If not for the unfortunately low budget and jarring/choppy animation, I would surely have given the art itself a 10/10. Mononoke also commits fully to a traditional yet eerie soundtrack which perfectly matches the overall aesthetic and folkloric narrative of the show.

Mononoke was an absolutely aesthetically unique and engrossing experience. But it lacked emotional and philosophical depth compared to my beloved Mushi-shi.