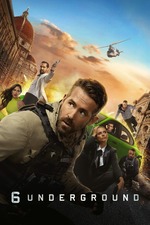 a series of notes i took while building stuff as 6 underground played in the background:

• Bay has definitely been watching Neveldine and Taylor movies
• There is an incredible satire about how billionaires ruin countless innocent lives in the pursuit of power and a fantastical idea of “the greater good” somewhere in the bones of this movie. But like, waaaaay deep in there.
• Jesus Christ the callousness with which people in this movie die... seeing bodies go limp as a car explodes, seeing total bystanders get hit by a car as the focus of multiple scenes... I don't think I've ever seen a more nihilistic film
• The best possible adjective I can use to describe this movie is “Unrestrained.” This is like Bay’s ultimate blank check movie. Made without a system to give him notes.
• The needle drops in this movie make it feel like the outreach video for youth services at a megachurch.
• The entire soundtrack screams "Imagine Dragons said no."
• Michael Bay has a very pointed contempt for Italy!
• Bay has always been good about blending CG and practical because he mostly does it with objects, like vehicles and buildings and machines and whatnot- but this feels like the first time I’ve seen him try to do it with people too, and it feels less smooth. And just ups the nihilism, because he mostly uses it to show people dying!
• Michael Bay wants to make sure that you see every single person that dies in this movie.
• “Comedy is when a man does something that is for girls and/or children.” - Ryan Reynolds
• One chase sequence is set to a eurobeat remix of "O Fortuna."
• This feels like a big budget action movie from 2007 directed by a war vet with PTSD.
• Some of this movie feels weirdly spiteful. Like it was directed with specific elements that Bay wanted to include to piss people off.
• The very first non-action scene of this movie is so poorly directed it really seems like Ryan Reynolds is trying to egg a guy into killing himself when he’s just being weirdly militant.
• Major plot point of this movie is a character having PTSD because he did not kill more people in Afghanistan. To clarify, his PTSD isn’t focused on the traumatic effects of seeing people die. He doesn't care about that. It’s based specifically on not being allowed to shoot a guy.
• This is honestly like a live-action Team America. There’s a scene where they disguise themselves as Muslims and set down explosives that are disguised like prayer candles.
• For some reason they have a joke in the middle of the movie that makes fun of their own soundtrack?
• God I hope the editors were paid by the hour.
• I knew this was gonna be awful and I still logged right in and watched it. On the day it was released. When 7 Underground hits Netflix in two years, I am absolutely to blame.