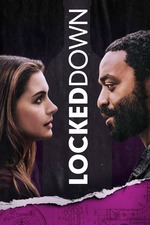 I knew it was gonna be a mistake to watch this, but I still did. Not because I thought it would be good or entertaining, but because I was curious and I thought it would be easy to watch. Which is why it got made- the Netflixification of media churns out project after project like this in service of “easy” entertainment, where the goal isn’t to make something good or truly entertaining, but to make something whose production is the entire headline: “It was made so quickly” “it’s about the times” “These famous people are in it” “Can you believe how they filmed this”– It’s not a movie they’re making, it’s a viral video. Their goal isn’t a lasting impression, it’s two good days of discourse and a sharp uptick in streaming service attention. And a week later, everybody has forgotten it. Including the people who made it. I knew this going in, and should’ve just watched literally anything else in protest, but I was curious, and I am stupid, and it is so easy to stay current when the most current things are so unsubstantial, so I turned it on and watched it and didn’t like it and now I am here writing about it and thereby stoking curiosity in other people with the unintended (but acknowledged) effect of probably making other people watch it too. Whatever.

Not at all a heist movie, by the way. Just an expensive mumblecore/Meyers-adjacent romcom about a miserable rich woman gaining a conscience once she’s accrued her own wealth and her perfectly sweet husband is dragged along. And then also there’s a pandemic. Every pandemic gag here was tired by mid-March. Movies should not legally be allowed to say people in the movies are doing things “as if it’s a movie.”