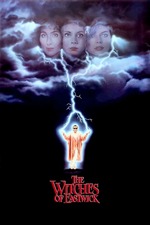 The Witches of Eastwick

The Witches of Eastwick 1987

Abstract, psychotic, and nonsensical, but extremely fucking fun in a way that proves George Miller is just the absolute king. I did NOT know anything about this movie going into it and there’s literally not one aspect I was expecting. Jack Nicholson saying “I always like a little pussy after lunch” felt like a Sixth Sense-level twist. As did the absolutely horrifying ending!!!

Jack Nicholson looks like I tried to draw a political cartoon of Steven Seagal from memory. Direct line from his performance here to Jack Black’s career. Cher, Sarandon, and Pfeiffer are so hot in this movie they’re hurting my feelings. If Susan Sarandon ever gave me the eyes she's giving Jack Nicholson I’d be storming the Capitol Building for Bernie right now. Gonna bide my time ’til then by setting up Google Alerts for “susan sarandon single?” and ordering ten whole books on ping-pong.

Nice to finally see a movie settle the long-disputed philosophical quandary of “how good is the devil’s dick.” Apparently, the answer is “it’ll turn Susan Sarandon into Bernadette Peters and make Michelle Pfeiffer dress like Jamiroquai.”