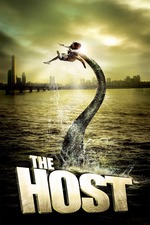 So after the amazing 'Snowpiercer', I decided to track back director Bong Joon-Ho's previous track-record and scour through his filmography - some of those I've already seen, namely 'Memories of Murder' and 'Mother' (of which I intend to revisit both of these masterpieces sometime this week, if time allows me to do so) but I've never seen 'The Host' before. I've only heard about the film by reputation but holy mother of god, I did not see this coming at all. I've heard some people regard it as a full-on 'comedy' but I never really fully bought into it because I thought; 'isn't that a monster movie?'. But boy oh boy, I'm fully convinced that Joon-Ho's destined for much greater things from here on out.

Very few films ever got it right when you attempt to infuse genres but Joon-Ho did exactly that with 'The Host'. He's able to create this terrifying atmosphere that will never feel out of place, even with a sea monster running around, that's populated with believable characters in an unbelievable situations - all the while manages to turn you into a bursting, constantly-laugh-out loud mode throughout the film. Except when shit inherently gets darker in the Han River scene halfway through the film - of which I won't spoil what happened - with few sub-plots opening up along the way that I felt the tone's sorta bumbling down all the way through the end, but it's not huge enough of a detractor that would cause you to dislike this completely. This film solidify what and how a proper monster-movie should be like.

There's a scene earlier in the film where a group of people who were just hanging around, enjoying the sun by the river, including our main character, spotted something far-off that nobody could make out what it is. It's hanging upside-down under the bridge, completely immobile - one of them even said "maybe it's a piece of the construction machinery" - before 'it' dives back down in the river. I felt a sudden spine-chilling, 'holy-shit-what-was-that', monster-movie moment jolt that I've never felt for a long, long time. The bravura monster sequence that transpires after that scene I described - that alone worth the entire four star.

Oh Mr. Joon-Ho, if only you'd have the budget what Gareth Edward had for his upcoming 'Godzilla' reboot....