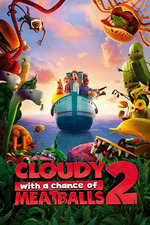 Cloudy with a Chance of Meatballs 2

Cameron and Pearn deliver a cute, family-friendly film that starts out a bit slow, but quickly manages to pick up pace and entertain the audience. The mixture of bright, vivid colors creates a beautiful film that is enjoyable to watch. The numerous food puns and animal names were great, although cheesy (see what I did there...), and kept me chuckling with each new introduction of a cleverly-named species. Finally, the various themes that resonated throughout the film were good for children and adults alike and force the audience to think about family, friendships, and the fact that animals are not bad, they are often just scared or misunderstood.

Overall, this wasn't as good as the original, but it was fun, entertaining, and worth the view if you're looking for a family friendly, lighthearted film.