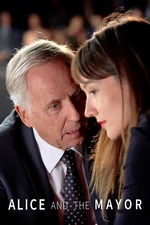 Dialectical political cinema. This film is built over a very unsettling thought: one must govern not with ideas, but rather with actions. When considering pragmatical european political discourse, it rarely gets better than this (the only issue one might find is exactly this pragmatism, where a history of imperialism and violence gets ravaged by the intricacies of modern day political discourse). It’s refreshing to finally see something that understands the hardships of implementing actual policies and changing the establishment, less concerned with abstract political analysis that usually washes these issues under the idea of simple lack of interest from the ones in power (it actually works within the frontiers of abstract thinking and concrete action, ideas and their limited strength), some kind of modern day ‘L’arbre, le maire et la médiathèque’. This is very funny and very fluid, controlled dramaturgically and well written. I only wish the secondary characters existed a bit more prominently and the occasional dramatic detours had more punch. By the way, I didn’t know it was possible for me to fall even more in love with Demoustier, but she proved me wrong once again.