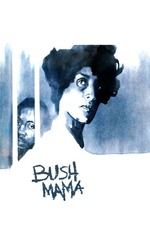 You can watch this film, along with others from Gerima and Shirikiana Aina HERE!

Wow. Ok that second viewing did the trick. Don’t know how I saw the humanity at the center of this as coming secondary to its messages, but I was dead wrong. Gerima was bringing forth surrealism while focusing on small emotions and big ideas in what is easily one of the greatest student films of all time.

It captures the disillusionment, not only with one’s environment and it’s ideas—religion, capitalism, war and self-hatred among them—but with one’s own complacency, and the physical and spiritual rectification that must eventually follow suit. Dorothy is constantly listening, dreaming, and looking as the viewer is; witnessing horror and contradiction all around her as we are, daily. It’s only for the sake of her progeny—who are damned either way as the film suggests through the vision of the child thief—that she becomes radicalized; reconciling with her environment and it’s future through present violence against the state.

Speaking of the state, I keep coming back to the long take in the prison. How it felt difficult to tell whether T.C. was entering or leaving its walls and, not to mention, difficult to understand why he was there at all (a fitting affect procured by Gerima’s decisive editing technique). In its seemingly unending and fluid structure, it telegraphs the ubiquitous relationship Gerima illustrates between the inside and outside world through the use of a cut immediately after. And that soundtrack over it is just too perfect. I think collaborating with grassroots musicians (see: Bill Gunn and Sam Waymon) is something that needs to find its way back into Black cinema.

I will say that while I thoroughly enjoyed and further understood it’s radical politics much more this time around, I can’t help but feel that Dorothy’s sacrifice of her wig as a means to radicalization hasn’t quite aged well. I do resonate more with its didacticism this time around. Mainly because it blends so well with the story, and secondly because, given the informational infrastructure of the time, it comes across as an unabashed and truly radical portrait of Black life that genuinely feels urgent and disruptive.

The improvisational direction also breathes life into these performances. Cora Lee Day delivers every self-defeating grimace and ironic, wicked laugh as Molly with pure conviction. One particular conversation between her and Dorothy about love delivers a crushing wave of pathos, as we get a peek into what forms her irreverent and slick exterior. I should mention here that my Dad, who was 12 when this came out, walked in and really loved the authenticity of this scene. Barbara O. Jones as Dorothy is also fantastic. Her gaze serves as a conduit through which the audience enters the story, transporting us from harsh reality to unreality without any pretense or inappropriately fantastic gesture. I also can’t leave out Johnny Weathers as T.C. and his hypnotic, cutaway monologues (from which, it seems, Spike Lee and Earnest Dickerson drew a lot of inspiration).

So yeah, happy that I immediately turned this back on and watched it again. Really looking forward to watching more from Gerima (somehow, some way).