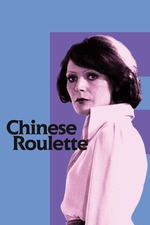 I downloaded this Google Chrome extension called 'Letterboxd Ratings Remover' and I'd highly recommend it for anyone that occasionally uses this app on their laptop. The experience of going in completely blind, without any preconceived notions given by what my LB friends or people in general thought, was something I didn't know I'd missed for so long. Letterboxd, as well as streaming services, should consider adopting a "blind mode" where we can choose to hide information from ourselves while browsing!

Early on, the disabled Angela Christ expresses a sentiment towards her mute servant, Traunitz, that seems to come from out of thin air.

"Your great-grandfather should have won the Battle of Katowice."

Given my limited knowledge of WW2 history, I had to wait until after the film to understand what she was referring to: the brutal Katowice Massacre of September 1939, perpetuated by Nazi Germany against Poland. After the sadistic game of Chinese Roulette—wherein Angela asserts that her mother, Ariane, would've been, "a concentration camp commandant at Belsen"—Ariane shoots Traunitz in the neck out of anger. A few things here fascinate me.

The first is that Ariane becomes incensed by the assertion that she is or would be a fascist, but only volleys this anger towards the two disabled people in the film (a core tenet of fascism that the film revisits time and again with subtlety). The second is that the camera floats from Traunitz's bleeding neck onto the opulent pearls resting at the back of Ariane's head. I was initially stunned by this shot, but didn't know why until Kast calls an ambulance and we hear the manor's name for the first time. It's not named for the Christ family who own's it, but after Traunitz, the servant. The subjugated.

Fassbender waits until the end of the film to reveal this, just as he waits 30 minutes in to reveal that the cause of Gerhard and Ariane's marital fission may be Angela's disability. Before that, the married couple are already shown to be somewhat sadistic on a human level. Not only in their infidelity towards each other, but at the torturous dinner table scene, in which they apathetically exclude their adulterous lovers in long-winded and private conversation with each other. When Angela peaks into their bedrooms, both Irene (played wonderfully by Karina) and Kolbe are repressed and trapped within the lives of their respective lovers, who are both naked and separately consumed by themselves. Fassbender begins by slowly unearthing the fascistic tendencies of the heart, and ends by grounding them in a history of evil—and privilege derived from that evil—that cannot be escaped by even our most violent reactions to it.

I love the fact that everyone in this film is a villain, and that Fassbender explores his themes through the use of absurdity and psychological drama. Although sometimes, the tireless formalism used to illustrate allegiances and refracted psyches/reality felt cumbersome (the aforementioned dinner scene being one such instance thanks to Gabriel's shit writing), I have to show appreciation for the way that it expresses how trapped these characters are—by evil, by privilege/history, and by each other. Should run as a double feature with Michael Haneke's Caché (or, considering just how damn good Angela is at orchestrating torture, maybe Funny Games).

• Andrew Sarris taught an entire class on this film at NYU in the 70’s??

• Here’s a really cool personal article from a gay man about the way Fassbinder affected his life:

Judas and the Black Messiah