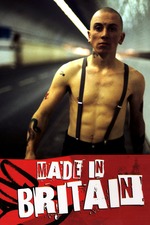 What struck me by the end of this were the myriad ways in which Clarke, Leland, and Roth bring Trevor to life with both absolute honesty and purposeful, subtle irony in regards to their thematic goals.

Trevor is probably the best portrayal of an outright bigot that I've seen in recent memory. This is in large part because there's no mind-boggling arc of redemption to bookend Made In Britain. There's no sick mom or little brother through which we can sympathize with him, and even when granted the opportunity to become a savior (in his own, nihilistic way) Trevor reacts with a form of betrayal and complete austerity that falls squarely within the scope of his own oft-repeated dogma. Trevor means what he says, and neither the filmmakers nor Roth treat this as a mistake to be corrected. Humanizing a character is an entirely different process than curating sympathy for them on the terms of a broader audience, and Trevor is a prime example of the former.

To my second point, there's that brilliant scene in the detention room that exemplifies the paradoxes and suffocating atmosphere of Thatcherism. First there's the setting: a room from which none of the characters can escape until an understanding of some kind has been reached. That understanding never comes in full, and the argument becomes more about the chicken and the egg problem of sociology than anything else. Who has locked Trevor in this room? Trevor himself or Peter and the Justice System? It remains unsolved as Trevor rattles off anti-authoritarian rhetoric while himself espousing authoritarianism in his very being: with his hate crimes, and, most ironically, with the swatstika embedded in his forehead. Likewise, Peter offers him freedom, but is undercut by the action of keeping Trevor in a prison while asking him to forsake his ideals in order to leave. And underlining all of this is Trevor's looming future within the justice system—another cycle from which he'll likely never be able to escape.

Even the choice of Trevor as a protagonist is interesting, because it makes the possibility of choosing sides impossible. To go against him is to support the bureaucratic justice system that fails children like him daily, and to root for him is to go beyond the pale. For this, we have to witness—without judgement—the nihilistic fruits of authoritarianism disguised as freedom of choice battling endlessly. It's a fitting metaphor for both Thatcher's Britain and Reagan's America of 1982. The genie of neoliberalism that, perhaps, can never be placed back inside of the bottle.