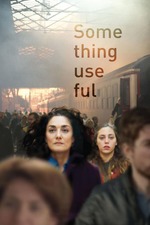 The first half of this film is incredibly immersive cinema.

The train crawls across dark suburbs, city nights, and vast country sides; mimicking the flow of time and using the most banal of incidents to inspire the imagination and draw us further in. It's much like Leyla's poetic mind, and like her the story is going nowhere fast as it gently rolls it's central conflict into the fray without so much as disturbing it's rhythm. There are heavy questions floating above the surface—like how does humanism deal with the concept of assisted suicide—but those are buried beneath the concerns our characters have for each other as people.

How will Canan protect herself, and how is she sure that this or any of the choices in her life are really hers? For Leyla it's ultimately her curiosity that drives her forward, and a need to reflect and craft with words that which she cannot yet see. Every background character is given the foreground at some point, making lasting impressions in spite of the little time they're given to do so.

And then Yavuz enters the picture. I have to say that my problem here isn't that the narrative forgoes it's "big moment", but that what replaces it feels hollow in comparison to what builds up to it. Gone is the movement, the mystery, and quiet reflection—the poetry that comes from the every day desire to connect with life. In it's place are philosophical musings that feel handed down from beyond the screen (mainly, the one's concerning Leyla's life as an artist), held in conversation with a man who nearly feels magical by design. The scene, which goes on for 15 minutes, seems to be consuming and grappling with it's established themes and character motivations in a way that resembles a snake eating it's tail. In my opinion, this is where the film almost dies.

What follows contains much of what the the first half held, but it was certainly a bit more difficult for me to get back into things. The theme of reflection across time found in the story of The Yellow Flower, Leyla and Canan's relationship, Leyla's journey, and the tangible reflections Leyla finds herself in provide a window to view our inherent need to connect. To the past, to each other, to ourselves, and sometimes to the things that keep us here. With that I think maybe I should revisit this once I've looked through more of Esmer's filmography.