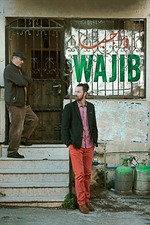 Been meaning to get into the films of Annemarie Jacir for a minute (i.e. for the past few days).

For one, I appreciate this film for broadening my perspective on Palestinian life beyond the political realm. The politics that do feature prominently in the film aren’t the ones that grab headlines, but the ones that intersect immediately with our characters lives and histories within the film. For that, I felt myself being educated at every turn while also being fed emotionally by the story’s smallest moments—especially its lies from loving places.

For instance, when Abu Shadi brings Shadi two cappuccinos "better than Italy", he claims that Yusuf insisted on the drinks when in reality it was Abu himself. It’s a tiny, lighthearted lie that opens your eyes to just how badly Abu wants his son to stay home with him, complimented by his orchestration of Shadi getting to see his favorite cousin. By the end, even Abu’s lies to his family about what Shadi does in his professional and romantic life come across more as off-kilter expressions of love for his son. They are his projected desires, yes. But they are also meant to curate that same love and respect for Shadi that his father feels. The humor and heart of scenes like these tie together an equally heartbreaking tale of a father and son who must find peace and understanding.

Shadi’s anger with his homeland is palpable. It’s rooted in childhood angst, borne of oppression and trauma, and expressed through intellectualism and communal misalignment—personal axes that run in both accord and discord with the films theme of (social) duty. Ultimately, he cares deeply for his community. But his methods may come across as condescending and alienating to the people that live and survive within it daily (wow, felt that). Likewise, his father cares deeply for the customs and opinions of his family in Nazareth, but has had to sacrifice love and due intolerance simply to preserve the safety, reputation, and cultural identity of his immediate family. It’s an analogy that never completely enters the realm of political stand-in, or loses too much empathy for one side in favor of the other. In short, it’s good writing.

I understood Jacir’s almost non-intrusive approach here, as it allows the father-son duo of Muhammad and Saleh Bakri to dominate the screen without constantly cutting through their performances. I did prefer the moments of handheld work where the camera moves in sync with the actors—such as the aforementioned cappuccino scene, the ending, or the touching moment when Abu eases Amal’s anxieties about her wedding dress. The ending does feel bluntly like a realization of the classical thesis-antithesis-synthesis formula, but I think it’s handled in a way that still speaks to the heart of these characters. And for that, I can’t be upset about it.

Wish I could find some of Jacir’s poetry online. Going to check out Salt of the Sea and like twenty impossibles soon!