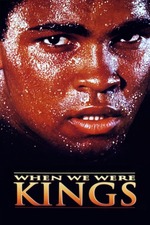 When We Were Kings

I have wrassled with a alligator
I done tussled with a whale
I done handcuffed lightnin’
Throwed thunder in jail
That’s bad!
Only last week, I murdered a rock!
Injured a stone
Hospitalized a brick
I’m so mean I make medicine sick!

Damn I love and miss this man. I was having an incredibly rough night, so I settled on Leon Gast’s 1996 documentary When We Were Kings to cheer myself up by revisiting the life of Muhammad Ali.

All praise goes, first and foremost, to Gast’s incredible camera crew. At its best this film captures the luminescence, pride, and kinetic energy embodied by Ali and the people that he loved so dearly. Miriam Makeba’s staccato breaths and cutting stare, B.B King’s tenderness, and James Brown’s cries and jubilations are like battery power for Ali’s comedic prowess and dogmatic discipline. It’s the sovereign state of Zaire itself that breathes the most life into the film, with its traditional dance and undying zeal for the impending clash of David and Goliath featuring heavily in the background. There’s a segment in which the streets of Black America and the land of Zaire are cross-cut to a performance of I’m Coming Home by The Spinners that defines the film for me. In its contrast it captures both an unmistakable kinship and a quiet tension between a family torn apart.

Unfortunately, the film falls short of realizing its potential due to some rather mundane and mismatched choices regarding the narration. I’m referring especially to Norman Mailer, who offers little to no perspective here beyond what any newspaper headline could tell you, along with two decent anecdotes. This is a historical event so rich with complex questions of cultural identity across the diaspora, and so defined by the raw Black energy emanating from its center that one wonders how greatly this film could’ve benefited from Mailer being replaced by someone with an actual perspective in regards to its core elements. Further agitating Mailer’s general uselessness is the rather obscene amount of screen time he receives to narrate things that we can clearly see with our eyes. Gast’s fatal misunderstanding of what makes the film tick culminates in an ending that meanders and sputters—dominated by Mailer and Plimpton’s dull commentary, and further marred by a ham-fisted montage coupled with utterly confusing musical choices.

Malick Bowens manages to gently mitigate these problems by offering interesting insights on how Zaire natives felt in regards to each fighter—replete with interesting why’s, such as the differing cultural context of Forman’s German Shepard—and in regards to themselves as a nation in this moment. Spike Lee, like Ali biographer Thomas Hauser, is near innocuous due to his lack of screen time, but still manages to offer insight into the cross-cultural tensions in play at the time.

Ultimately, this film serves as a brutal reminder of a moment lost. An event so deeply rooted in 1970’s Black power becomes awash with the white voices at the center of its telling. Still, I love what beauty and poetry there is here. In another world I imagine it being told with the right voices, the right hands, and those discerning, cutting eyes.