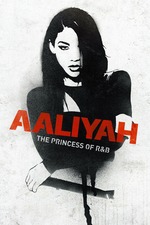 Aaliyah: The Princess of R&B

I knew this one was going to be bad based on the trailers and clips, but this is some next-level shite. I'm going to go through some major bullet points.

- The lead, Alexandra Shipp, just isn't Aaliyah. She has the look about halfway down, but that's it. The mannerisms are off, the line executions are off, the performances are sloppy. Her singing voice? Yikes.

- Compared to everybody else though, she nailed it. The people who played Timbaland and Missy Elliott in particular are awful, both in looks and acting. Also, the standout scene for me (in the worst way) is where Damon Dash lazily lists Aaliyah's accomplishments out like it's from a script.....because it probably was.

- The music. I do understand that this is unauthorized and Aaliyah's family didn't give them any musical rights (or seemingly anything at all; more on that later), but like this? Was it really that dire of a situation having to speed up and morph COVER MUSIC????? Even at normal speed and pitch, it's horrendous.

- Honestly, even those $2 bargain bin no-name distribution "unauthorized documentaries" have rights to low-quality Youtube video rips. This biopic didn't even have that.

- The timeline discrepancies, especially during the performances. Example, when she performs Marvin Gaye's Got To Give It Up (which she actually did cover, so I'll give them that much). A cover from 1996.....using an outfit she didn't wear until at least 2000. There's also jumps in life events.

- The overall lack of care. This ended up extending outside of the biopic, as both Lifetime and Wendy Williams (executive producer and ringleader of this shitfest) tweeted about "Let Me Know". Fun fact: that's not the song title. It's actually "At Your Best (You Are Love)".

- (I had previously forgotten this one) The way they handled the R. Kelly relationship is absolutely atrocious. Reminder: she was 15, he was 27 (far as I know). Not only was it portrayed as an innocent teenage love affair, but the scene just went on for far too long.

So, you might be wondering: is there anything good out of this at all? Besides unintentional hilarity....it might be better for non-Aaliyah fans? Maybe? It would still be a shitty biopic, but at least there wouldn't be as much for them to pick apart.

Seriously though, this is The Jacksons: An American Dream-level garbage.

Not Another Celebrity Movie