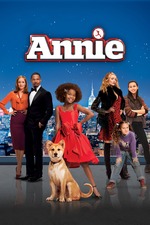 "Luck is for suckers."

Almost right from the get-go, I figured this was going to be a struggle. After the clever, quick "Annie" joke, the first scene turns into a mockery, as the entire class basically dribbles saliva right onto (the actual) Annie's shoes without any effort at all. Way to puncture "feel-good" through my chest, Will Gluck.

It suddenly gets worse as a T-Pain-for-kids version of Hard Knock Life is the opening credits song, complete with off-beat....everything, as the entire sequence is basically "Look how happy she is! Look at it! Seethe in your pity and spite!"

Hi, Rose Byrne! You're great. You're always great. I don't even know your character's name...actually, that doesn't matter because you're so great.

Cameron Diaz, you're on the opposite end of my spectrum. Be gone, witch!

The first actual musical number, and it's lip-synced on top of the autotune. Fun is. Such is with most of the numbers.

I'll be honest, when this movie gets "objects as instruments" right, it nails it (e.g. the actual Hard Knock Life number). That perfectly-timed shot of the brooms hitting the camera.

Stacks phones are Windows phones, and their top-tier phone has a 480p screen (on top of it being an oven pan). No wonder why they have to be given out.

Coincidences everywhere. Really making it hard for me to believe anything that's going on. I'm not even worried about the sudden breaks into song-and-dance because that always happens.

Also, caricatures. Half of the adults in this movie are cartoonishly evil. The vile, washed-up rockstar babysitter, the snobby, clean-freak billionaire, the rude Russian service worker, etc etc etc.

However, a surprising number of jokes hit for me. The food bank scene in particular is a great set of little jabs. Nothing laugh-out-loud (except the Phil Lord/Chris Miller scene which is great stuff), but some nice chuckles.

To summarize, there are two main issues that keep me from recommending this at all:

1. Annie just goes on for far too long for no reason. Everything could have been (and has been in the past) cleanly resolved in a slick, speedy 80-90 minutes. This is 115 minutes. Could've cut most of the final act, as it's just plastered in cheese.

2. Being a musical, that part of this movie is almost unanimously awful. Almost every number, vocally and otherwise, feels robotic and cheap. The penthouse tour? Yes, it's a musical number. Yes, instructions are part of the lyrics. Yes, it's pretty horrible. The bar number is also extremely disturbing. Even the tiny sparks of greatness just aren't enough to raise it beyond child's play.

2.5. There's an odd amount of "adult references" here. Government spying, prostitution, alcoholism, depression to the point of wanting to be killed and a sextape(??) are some examples alluded to.