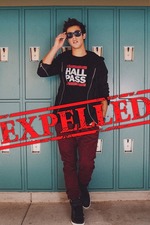 Surprise, surprise. The two main actors, doofuses (doofi?) that became famous from six-second videos, can't handle a full-length movie. What could have at least been a modern-day attempt at Ferris Bueller is actually a completely humorless and rather mean-spirited film that somehow entirely fumbles its basic plot and makes it far more complicated and filled with holes than it should be.

Not only is the acting unanimously awful, but some scenes even seem unfinished. I couldn't tell whether the actors just didn't care at all or if the director/writer (first time at both, and holy crap does it show) just refused to do any more takes. For a movie that should rely on goofy pranks, there's a lack of enthusiasm as a whole. Any "enthusiasm" that exists is represented by everybody being loud and obnoxious. Yes, it's one of THOSE movies that attempts to force laughs by screaming at you.

Even if the actors learned to use their inside voices for once, that still wouldn't change that not one of these characters is someone I could root for. The movie tries hard enough to show the audience "there IS a reason behind this, trust us" but, unfortunately, these are just not good people. The guys are snarky, the girls are ditzy, and the adults are sinister caricatures that never have a clue of what's occurring. There's other ways to make 'teens overcoming the adults' believable besides using ridiculous characterizations.

Even the central love story is barely expanded on, and THAT might still be pushing it. Yeah, obviously the main guy gets the main girl, but...it.....just.......happens. No rhyme or reason at all, no big moment of connection, she just randomly crawls to him. Egad.

That's still not all. I forgot the best part of everything. The main guy is supposed to be portrayed as someone who has every skill he could need and ambition through the roof. Someone who always complains about "missed opportunities" and how he wishes he could fulfill them for once. Okay, that's fine. There are instances where the school has to be hacked into.

He comes to the rescue, correct? NAH, HE RELIES ON EVERYBODY ELSE. I........alright, so what does he do, then? He sits on his ass and shoots marshmallow fireballs (which is nowhere near as awesome as that sounds).

I can only recommend this movie to the same audience that has probably already seen it. The preteen drones that made these Viners/Youtubers famous (amongst even more insanely mindboggling creations, such as Alex from Target who is.....a Bieber clone that worked at a Target and is now going on tours.....for looking like Bieber. Yeah, 2014 can get fucked.)

(Also, there's that whole scandal where Marcus Johns probably raped his ex a while back, but that's for another time.)