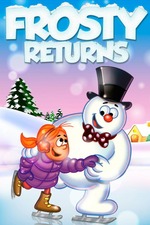 Jonathan Winters (hardy-har) makes a cocaine joke just before his character dives into a snowbank. Glory.
"No, Matt, he's clearly referencing Coca-Cola."
Why would he reference a soda before piledriving into snow? He definitely means powder.
"No, he actually says cocoa."
Coco, maybe. He's in love with the coco.

Microwaved pancakes???????? THESE PEOPLE ARE DESPICABLE!

Plummeted to half a star once the rap section started. The cat was me that entire time.

"Some things just can't be explained....like rhythm." *Everyone proceeds to completely lack rhythm*

"By the time they finished, they had no feeling in their fingers." But that took three seconds........

"You can't stop Mother Nature!" Yeah, the message is actually that heavy-handed.

Bizarre jokes, ripoff animation, bad voice-acting and horrid singing of an awful song that they believed was good enough to use three times. To think I used to own this on VHS tape.

Why Don't You Play in Hell?