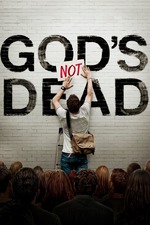 I make it a running joke on this site on how horrendously wasteful this movie is. Some people who have not had the misfortune of seeing this torture might wonder: Why do you hate this so much? Surely, it can't be that bad. It's just a Christian movie, right?

The very basic concept of the religious student who outsmarts his atheist teacher could have made a thoughtful, powerful film under the control of ANYBODY ELSE. ANYBODY AT ALL. However, this is one of the most blatantly hateful and despicable....things I've ever had the displeasure of viewing. There's a simple message for anyone who isn't devout to the church: go to Hell by any means necessary, even if that means "sacrifice". Anybody who truly believes in "loving everyone" should be angered by the very existence of this movie.

Even putting all that aside, it's horribly-made. The new actors struggle. Kevin Sorbo makes an ass out of himself, much like he did with some of his recent real-life comments. The cinematography is bland at best. The pacing is slow. It's all one big "ugh".

God might not be dead, but I likely should be after watching this shit.