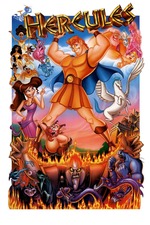 "I've got 24 hours to get rid of this bozo, or the entire scheme I've been setting up for 18 years goes up in smoke....AND YOU ARE WEARING HIS MERCHANDISE??????"

It's pretty disappointing that this is still the best Hercules movie I've seen, considering that it still isn't *great*. Is it seriously too much to ask for a historically-accurate Herc movie that doesn't make him a gladiator or turn him into Robin Hood?

Anyways, gotta focus on this movie. The songs are silly, the action is silly, James Woods hams the hell out of Hades (but it's a glorious performance). So it's all pretty silly...but it's fun which, right off the bat, is better than I can say about any Herc movie I've seen. One of Disney's lesser "animated classics", but still good enough.

No, James Woods, not quite. Not quite.