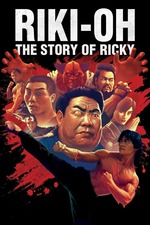 Riki-Oh: The Story of Ricky

(I watched this using the original audio track and subtitles. However, I found out about this from a trailer using an over-the-top dub, so I hope to watch that as well.)

"Why not just have a doctor take the five bullets out?"
"They're souvenirs."

This movie is insane. Unquestionably one of the most violent, outlandishly gory, limb-exploding films I've ever seen. It's completely ridiculous and it is very much advised to leave your brain at the door. A man extracts his own intestines and uses them as a weapon. Seriously, just leave it.

There is a plot. Sort of. "By 2001 A.D., capitalistic countries have privatized all government organizations. Prisons, like carparks, have become franchised business..." This is stated in the film's prologue, and it does take place in a prison. Also, the prison system is set up like a food chain, and since Ricky's becoming a dominant force, all the higher-ups want him taken care of. However, this is really just a showcase of Ricky (I'm assuming Riki-Oh, but my subtitles said Ricky Ho) punching body parts off, and does he ever.

Unfortunately, the Blu-Ray quality left much to be desired. I had to be sure this wasn't just an up-scaled DVD. Blurry text, washed colors, bad focus, etc etc. It's not unwatchable by any means; I've just been too spoiled by masterful restorations to put up with something like this.

However, I'm rating the movie itself, not the copy.