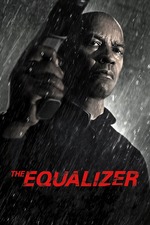 (tagged with all (I hope) weapons Robert uses)

"The two most important days in your life are when you were born and when you find out why."
-Mark Twain

Thus begins this movie, where Denzel Washington realizes he was born to become Captain Save-A-Hoe.

Okay, in all seriousness, I think the Alina/Robert friendship is a cross between extremely creepy and completely unbelievable, and all steps that the film took to try changing that made everything worse. Even if the steps worked, it all culminates in Robert saying he wants to protect her "because I can". What a bullshit workaround.

Besides some of the deaths, this is rather bleak and humorless, perhaps unnecessarily so. Even the scenes with Robert and his wannabe security guard friend are dull, as is the "Boston pride" subplot (except for when someone's face gets booted to death). On top of that, there's a minute-long scene where the camera stays focused on a bad guy's tattoos for....absolutely no reason, it turns out. Maybe the director thought they were intimidating and/or badass, so he felt the need to use multiple angles.

The action's nifty, even if Robert's practically invincible. However, there's one brief scene in particular that angered me quite a bit. Robert decides to blow up a highly-flammable, 20000-ton vessel. The vessel explodes. Even though there's a ton of bits, pieces, fast-moving ground material, fire and mini-explosions surrounding Robert, he just keeps on walking like absolutely nothing is happening. Of all the "badass walks away from explosion" scenes I've encountered, this could handily be THE worst one I've ever seen. Nobody stopped this at all?

Denzel (acting-wise, not the Super Saiyan ridiculousness) is ultimately the factor that maintains this movie's shreds of credibility. He always tries his damnedest even when it seems like nobody else wants to.

Pushkin is a fantastic name. This movie? Not so much.

(On a much better sidenote, this is the first time I've tested my Sennheiser HD598s on a movie. The separation and soundstage, particularly during the final store encounter, is pretty phenomenal.)