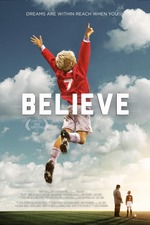 Very plain, generic and "good enough" with barely anything worth talking about. So, a lot like most inspirational movies.

Except for one absolutely hilarious aspect:

Pass The Dutchie. Yes, Pass The Dutchie is actually used during possibly the worst scene they could have chosen. No joke, and yet it is absolutely hysterical.

I understand that this is an 80s-set movie, so 80's soundtrack. Obviously. But THAT? hahahahahahaha

Also, the logo looks like it should be slapped on a Barbie box.