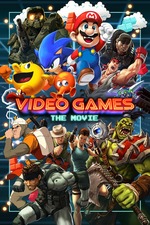 However, holy fucking shit was this some temper tantrum-prone promotional material out of hell. There are three HUGE, MASSIVE problems with this.

1. I already know every fact they try showcasing as "OMG, UNDISCOVERED INFORMATION, SO IMPORTANT". Come on, stop. Too damn overzealous.

2. Some of their pro-game arguments................what? I'm against the media criminalizing video games and the people who play them too, but where the hell did some of these points come from? Half of these are completely "blind-faith" arguments that seem like they were thrown out there because the obvious ammunition they could've used was locked in a bunker. Jeez......

3. That poster. I can't help but always notice that Mario's teeth look like Yoshi finally got tired of his shit and pushed a gap in them with his tongue.