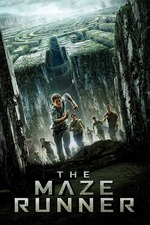 "No one's ever survived a night in the Maze."

Having seen so many of these 'Young Adult' trilogy adaptations cough and splutter on the first outing, leaving an incomplete franchise, I've left watching this until it was all done and dusted. So having picked up all three movies on Blu-ray for next to nothing, lockdown has seen me have a crack at Wes Ball's trilogy.
The premise is pretty simple for the this first outing. The dystopian theme (is there any other for this sort of YA film?) sees the central character of Thomas arrive via an elevator at the Glade - a rural setting surrounded by huge concrete walls, which have openings at various times to allow entry to the surrounding maze of the title. There's an all male community at the Glade, that have both made a life there, but also occasionally venture in the darkness of the maze....
Have to say, I quite enjoyed this, and it's certainly never dull. there's some nicely drawn main characters, and moments of tension, with the film never showing it's hand too early on - the viewer only knows as much as the leads. Pretty much most of these sort of things borrow from other films, and this is no exception. Elements of Lord Of The Flies, Hunger Games, Aliens and even The Bourne Identity are all here. It doesn't suffer from that though, and I got to end credits genuinely curious to see where the next film takes things. It never outstays it's welcome either with a relatively lean running time given that it's a trilogy starter.
The cast is decent, with Dylan O'Brien being a likable lead, and Will Poulter providing some good support. Wes Ball does a solid job of directing too, leaving me more than happy that he went onto direct parts two and three as well.
Despite 'slumming' it with HD rather than 4k, I can't imagine this looking much better had I ponied up for the full fat 4k version. Very crisp images, deep blacks, and genuinely nearly as good as anything I've seen on 4k. I had it playing via a 4k machine and an OLED, so the upscaling looked very good.
The Dolby Digital track was more than adequate, with the rumbling generated by the moving of the maze walls, and echoes in the tunnels being very impressive.

So, not a film to rival say Fellowship in terms of quality (what is?) for a first instalment, but certainly worth my time, and the meagre few pounds it cost. Roll on The Scorch Trials!