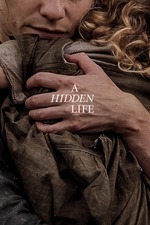 Terry M isn't really back from very much with his return to narrative feature. He's not back to the more coherent approach in Badlands and Days of Heaven, but rather continuing his fragmented and chopped up style with a bit more of a story.
I should clarify I didn't finish this for a number of reasons (the quality of the film being one) but I'm already familiar with the story itself and am more than aware of how Malick makes his movies. It doesn't make so much sense to stay and finish a 180 minute movie with 18 minutes of plot when it's a clear-cut situation from the beginning; widely either/or with good vs bad and knowing how it's gonna end anyway. Diehl's character though obviously admirable, is never really challenged in his beliefs. He is subject to the obvious attacks from friends and enemies and ultimately pays the price for his refusual to support the nazis in any way whatsoever but he makes his mind up about this almost instantly, within the first 20 minutes, and never doubts himself which makes for, above all else, tedious watching when it's a 3hr movie.
which it absolutely doesn't need to be.
Especially with dialogue so excruciatingly simple it can only be likened to a series of trailers strung together. Especially with how much running through Austrian hills there is. Especially with Malick's visual style insisting on its fly like approach -- not a fly one the wall one, this is far too close, moves too much, buzzes and bothers. I'm wondering if he's allergic to tripods and using lenses over, say, 30mm. The countryside looks lovely but everything else is beyond hideous. It's impossible for me to form any sense of emotional connection when there's a jump cut every 5 seconds no matter how much I'm supposed to be moved by a man and a wife hugging one another's faces.

This is far from Malick's worst and far from the year's worst too but this is still something I can't pretend I have any desire to ever return to. A shame considering how optimistic I was before the trailers dropped.