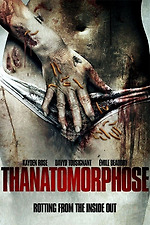 (I didn't check the Spoilers box because nothing could be more obvious than what happens at the beginning, middle, and end of this movie, but go ahead and skip this review if you're worried about it.)

If the big stupid pretentious crack-in-the-wall-that-looks-like-a-pussy-full-of-blood-and-cum poster for THANATOMORPHOSE doesn’t give you pause, well, then maybe you will actually enjoy an entire movie that does nothing but connect the very obvious dots between the reality of being a boring loser, and the fantasy of being a living corpse. In Éric Falardeau’s feature debut, which absolutely should have been a short like the rest of his production, Suicide Girl-ish model Kayden Rose plays a failed sculptress with shitty friends and a shitty boyfriend and a shitty lover and a shitty life who just rolls around in her shitty apartment all day until she literally becomes a human bedsore. Virtually nothing else transpires in the movie: She rots, she vomits up maggots and/or semen, she masturbates compulsively (which doesn’t seem like a fun thing to do when you can feel your soft tissue deteriorating, but what the fuck do I know?). That’s the movie.

Amazingly, even though the film is so totally inert, it still manages to build up a massive rap sheet of unforgivable crimes. The very premise is a big problem: its central metaphor (which is almost not even a metaphor), equating wasting your life, with physically wasting away. I mean...who cares, right? This is actually the very question that Kayden Rose answers out loud, repeatedly--“Nobody cares”--and the problem is that you don’t find yourself wishing somebody would begin to care for her. Depression and hopelessness are the veritable bread and butter of horror, things very worth artistic exploration, but it’s hard to feel compelled when the central character is nothing but a body: a mostly nude mannequin whose tits or ass or crotch are often right in the middle of the frame, and whose acting and diction are so atrocious that it’s pretty clear the director only sees her as a hot piece of ass, or a piece of ass on which he can hang a lot of special effects.

Which brings me to my second charge, that THANATOMORPHOSE seems to want to deliver some sort of message about misogyny, and is absolutely incapable of doing so. Body horror is a really great playing field for exploring female experience. Women experience both the inside and outside of our bodies as a matter of course, whether we like it or not, in ways that are can often be involuntary, distressing, painful, or all three at once. Even a lot of male-oriented body horror is aimed at men’s fears of female experience--see: the equal opportunity forced pregnancy of the ALIEN franchise, or James Woods’ abdominal vagina in VIDEODROME. The thing is (and I shouldn’t have to say this), it only works when there’s a richer narrative that assigns meaning to these experiences, or at the very least, a character with more than one dimension. Kayden Rose gets beat up by her boyfriend, her side piece isn’t that much nicer to her, and her friends are happy to point out that she’s covered in bruises without making any helpful suggestions. She responds to all this with a vague, gestural self-pity that makes her transformation into a zombie feel like a foregone, and not very interesting, conclusion. “Blowjobs are gross and periods are gross,” Falardeau seems to say, without realizing that these juvenile observations don’t bring any psychological depth to the empty displays of misogyny in his movie.

And look, I’m not much of a theater person. I don’t need heavy duty character studies or dense, twisty narratives to justify a movie’s existence. I’m perfectly satisfied with imagery and air quality. Unfortunately, THANATOMORPHOSE’s willful commitment to showing absolutely nothing happening for intolerable stretches of time is not supported by any kind of aesthetic interest. Maybe Falardeau thinks this is supposed to be a hard gore version of JEANNE DIELMAN, 23 QUAI DU COMMERCE, but he’s got a lot to learn about tension, atmosphere, and even just photography, before he gets there.

Really the only thing THANATOMORPHOSE has to offer is, like its obvious (and vastly superior) ancestor NEKROMANTIC, some pretty excellent special effects. This is all thanks to David Scherer, an accomplished and prolific makeup and effects artist who no one would be surprised to hear has worked with the likes of Gaspar Noe, and Hélène Cattet and Bruno Forzani. It’s hard to estimate how many hours of Scherer’s work must have gone into this otherwise hollow film, so that at least Kayden Rose’s rotting corpse looks great. I’m forced to admit that, due only to this artistry, I was strangely compelled by the very, very end of the movie. We--by which I generally mean, “the West”--have a highly dysfunctional relationship with the idea of death. Many people live happily with the delusion that it is like some exotic cancer, something that only happens to other people. We find the concept of the cessation of existence, of consciousness, of physical integrity, so disturbing that we don’t even permit other people the autonomous mercies of euthanasia or suicide, no matter how deteriorated is their quality of life. When you make any topic this taboo, you eliminate the possibility for anyone to address it in a dignified, peaceable manner. In this way, people are condemned to live in unnecessary terror of the natural inevitability of death, to live with endless physical agonies, to watch with horror the disintegration of the body--that thing which is not only our vehicle in this world, but with which we so strongly identify our “self”. There is no explanation for why the protagonist’s body is disappearing out from under her mind, but in her final moments, Scherer’s makeup effects help frame this movie as a vivid nightmare about the intolerable separation of the mind and the body--a trauma that may happen to any of us, even many of us, at any time and for any reason.

...that said, because of Kayden Rose’s mysteriously persistent consciousness, I had to wonder: “Ok so, just because she’s been separated into all of her parts now, does that actually mean she’s dead? Or like are her molecules still alive? I mean even though the movie is over, could something still happen after this?” I don’t usually indulge such nerdy logistical exercises, and I rarely obligate movies to make sense as long as they have other virtues. Suffice it to say, my aberrant behavior can stand as evidence of the near-total lack of virtue of THANATOMORPHOSE, and I’m really just glad the movie is over.