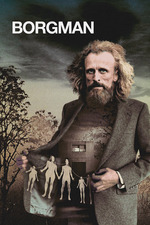 A vagrant enters the lives of an arrogant upper-class family, turning their lives into a psychological nightmare in the process.
I knew nothing of this film going in, and I'm not going too far by saying I may know less now that I've seen it. This movie is so beautifully shot, so compelling in nature, so seductive and surreal; it has haunted me the past few days since I watched it.
The Borgman is part of a group of people who seem to feed on other people, perhaps especially the upper class. He uses what may be unnatural, or supernatural, charms and ability to cause nightmares that undermine a person's connections to tear a family apart and gain access to their wealth and recruit through, magic or surgery, new followers.
They are chaos seeping into the cracked foundations of great wealth and stability. They are monsters. They are charmers. They are opportunists and dream eaters and a plague sweeping over the land. They are undefinable and that is why I will always be intrigued with what this film shows me of them.
This is true psychological horror. There is only one instance of actual gore and it is so well used to stun you that you don't dare call it a jump scare, but maybe a warning.
I realize this review is enigmatic and cryptic, but I seem to not be able to talk about this movie without going all confused in my head.
Ooooo it was good.
Also, Jan Bijvoet as Borgman? Ha-cha-cha-cha-cha.