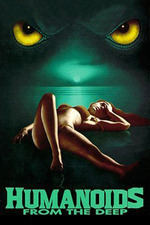 Humanoids from the Deep 1980

I should add to my initial review:
I forgot to mention all the boobs! Just breasts akimbo and everywhere!
I've also learned the Corman (exec producer) had an expectation the director (Barbara Peeters) failed to live up to. So he hired a second unit director, James Sbardellati, who added in a whole bunch of exploitative scenes and nudity, and made good on Corman's vision that the monsters "kill all the men and rape all the women". This was done without alerting a large part of the core cast and a few actually tried, unsuccessfully, to get their names removed from the picture
I also learned that Joe Dante was offered this film first and turned it down. What a different movie it may have been!

ORIGINAL REVIEW: A new species is created when a company trying to increase the growth rate of salmon lose a few mutated fish in the ocean. These amphibious monsters have discovered men to be a threat to their territory, and women to be the perfect vessel for their, uh, progeny. In short, some awesome looking swamp monsters get all sorts of murder-y and rape-y on the human population of a quaint fishing town. The end scene is a real side-splitter!