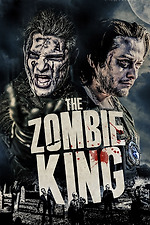 A straight to DVD British horror starring Edward Furlong and Corey Feldman?
How could I resist?
A desperate man makes a pact with a demon to bring hell to earth if it means he can be with his beloved late wife. In doing so, the dead rise and he alone can control them by keeping seven souls in a flask around his neck.
7 Souls, 7 Steps, 7 Days to HELL!
It's up to a misfit group of survivors and a drunk priest who is the only one who knows what's going on to stop the Zombie King from destroying the underworld and raising Hell, though the Zombie King has his own problem to deal with before the deal is fulfilled.
How did this happen? How does a British made film end up with two of the most D-listed names in American cinema history? I seriously want to know! According to IMDb trivia page:
"Writer/Director Brian A. Metcalf (Adverse, Living Among Us, The Lost Tree) has been quoted as saying Corey Feldman is the only living actor he must work with before he dies. Metcalf has called Feldman a national treasure, the "Brando of the 21st century.""

Furlong and Feldman both have limited screen time. Whether that's good or bad I guess is up to how much you like and expect from these two.
Personally, I think Furlong gives his all as a intensely distraught husband and then spends a lot of time being cool AF on a motorcycle. Feldman is 100% inhabiting his character, unfortunately his character likes to rhyme, Leprechaun style. There's also an attempt to pull a Shaun of the Dead inspired zom-com minus the rom that works fairly well in a B movie way with some fun acting by the lead human characters, but never quite reaches the height of the former's glory in humor or zombie effects.
Overall I thought this was a fun movie, if not so much a GOOD movie. I enjoyed the watch and always love to see Furlong and Feldman getting roles.